“At first she was overjoyed that he would be with her, but then she recalled that human people could not live under the water, and he could only visit her father’s palace as a dead man.” ― Hans Christian Andersen, The Little Mermaid

This is the second in my series of photographs of back-lit, vintage View-Master reels: Hans Christian Andersen’s The Little Mermaid.

Here, I used my favorite reel from my vintage View-Master collection, Hans Christian Andersen’s The Little Mermaid, manufactured by VM in 1958. I love View-Masters and all things 3D, and fairy tales (especially the un-sugar-coated original versions) like Andersen’s are so magical and maudlin.

Here’s the whole (sad) story, image by image, taken from this VM reel:

1. The little mermaid lived far down in the sea.
2. She rescued a prince from his sinking ship.
3. A girl from a convent found the prince on the beach.
4. “My magic,” said Sea Witch, “Will give you legs.”
5. Now human, the mermaid became friends with the prince ―
6. ― but he married the girl from the convent instead.
7. The grieving mermaid became a daughter of the air.

I left all of the dust and scratches on the reel’s transparency in place to add to the photo’s vintage look. I also adjusted the color balance and colorized the photo a bit since View-Master transparencies lose their saturation and become somewhat monotone over time. I left the number “2” in place to show that this is the VM reel’s 2nd transparency. I also realigned the text to fit beneath the image directly because the text captions in VM reels are offset from the images.

Combining these photos allowed me to show the reel as if it were lit from behind – as when viewed with a View-Master – while at the same time maintaining the visibility of the reel and it’s text.

The original photographs that I took and used for this piece are below. 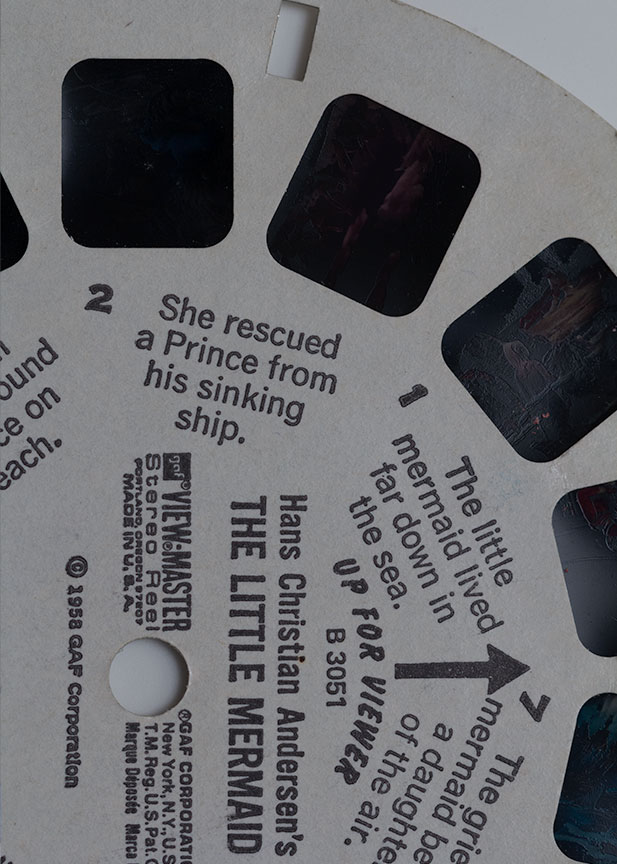